It has been one year since ground first broke on the new high schools in SD62 and construction at Royal Bay and Belmont Secondary continues to be on time and on budget. The new high schools are halfway through the two-year build process.

Belmont Secondary, situated between Glen and Langford Lake is 80% structurally complete. By October, the roof is expected to be finished and by November Belmont will be mostly locked down with windows and doors installed. Finishing work on the school will begin in the new year. Belmont is built for 1,200 students and features one large gymnasium that can be split into two full-sized playing courts, a neighbourhood learning centre for day care and post-secondary classrooms, seven science labs and one multipurpose lab, and a theatre with seating for 300 people. Belmont is built to LEED Gold certification. Yellowridge Construction Ltd. was awarded the contract for the $53.9 million dollar school in June 2013.

Royal Bay Secondary, with its views of the Pacific Ocean is 98% structurally complete. The new high school will be 75% sealed within the next week, and the walls are 60% framed. Finishing work will begin the end of September, which includes dry wall, flooring, cabinets, and light fixtures and will continue over the next year. The asphalt rubber track will have its asphalt poured within the next month. Royal Bay features a teaching kitchen, theatre seated for 350 people, rooftop basketball court, asphalt rubber track, and neighbourhood learning centres. D.G.S. Construction was awarded the contract for the $40.8 million dollar school in June 2013.

“It’s not often that a school district simultaneously builds two new high schools, but the Sooke School District on Vancouver Island has been racing to have both facilities open by September 2015.”

Read the full article in the Journal of Commerce

Belmont Secondary is 20% complete. The pouring of the second floor is in process and the exterior walls will be completed in the spring. Over the next two weeks construction crews are going to pour the slabs for the gym and shop areas which are located at the back of the building. As the weather warms up, civil work will continue on the site to define the fields, and all drainage and underground works that go into servicing the property. Belmont Secondary is on time and on budget. 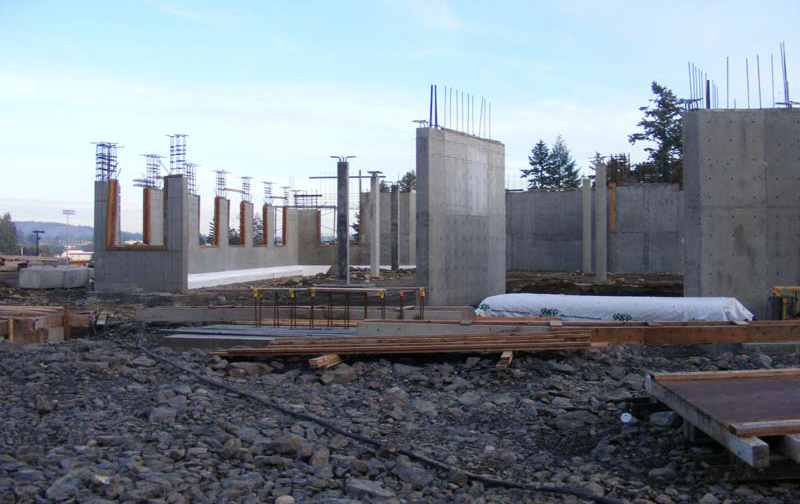